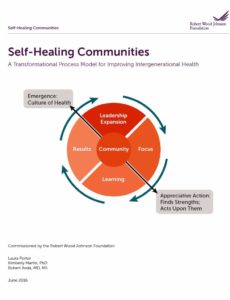 A groundbreaking new report outlines a comprehensive model of building community capacity used in the state of Washington. By increasing the capacity of the community to reduce adversity, the Self-Healing Communities Model (SHCM) helped make dramatic reductions in rates of youth and family problems including suicide and suicide attempts, child head injury hospitalizations, filings for juvenile offenses and drop out rates and developed strong networks that promoted much greater collaboration across the community of Cowlitz County in Washington. Importantly, the report states:  “The model builds the capacity of communities to define and solve problems most relevant to them and generates new cultural norms that mirror the values and aspirations that community members have for their children.” It empowers and nurtures local leaders to think about whole systems, not just their part of a system and it uses data to decide how and where to focus efforts. As a result of implementing the Self-Healing Communities Model, “visible changes were made that helped to instill a sense of hope in communities that had given up on the prospect of a better world for their children”. To read the full report, please click here

We are excited to share this critical report. TLPI believes, similarly to SHCM, that it is critical to empower schools and those working directly with students to identify their own school-wide urgent priorities and to give school staff the time and resources to address them in creative trauma-sensitive ways.

FEATURED VIDEO: What Does a Trauma-Sensitive Middle/High School Look Like?

We are thrilled to share with you this short video highlighting one middle/high school’s journey to create a trauma-sensitive, safe and supportive school.